it's a while since I last posted but we've been busy with a new initiative, the iTeach Online Podcast. A collective of conversations about pedagogy and educational technologies. New episodes are released fortnightly on Wednesday. Check it out!
Posted by Bartonferry at 02:10 No comments:

Learning Technologies at The University of Nottingham

Posted by Bartonferry at 05:38 No comments:

Posted by Bartonferry at 07:14 No comments:

Kaltura has a neat integration with moodle that makes it appear that all of the functionality for uploading, recording and creating video comes from within moodle itself but invisibly in the background Kaltura is cleverly dealing with all of this.
We haven't enabled the screen capture functionality here to avoid confusion as we support Echo360 and recommend it for simple screen capture for teaching staff (since most staff will already be familiar with using it in teaching rooms). However, we have enabled it in MediaSpace.
If anyone from any other institution is reading this and is using Kaltura screen capture in moodle, would you care to share your experiences?

Posted by Bartonferry at 08:20 No comments:

Microsoft Sway - Microsoft are on site...

Professor Sarah O'Hara showing us how to use Microsoft Sway! Roll on the technology.... 💻🖥📱 pic.twitter.com/4v3Scx8duf

Posted by Bartonferry at 08:08 No comments:

Kaltura to offer cloud TV on Microsoft Azure
Posted by Bartonferry at 08:05 No comments: 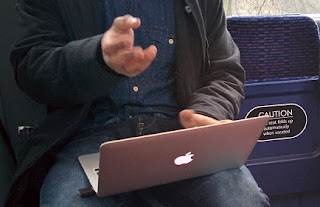 With the proliferation of Apple tablets on campus, you might think that Apple have the largest share of the tablet market.
However, the Microsoft Surface Pro appears to be becoming the tablet of choice for teaching staff here and these are just a few reasons why I think teachers have embraced it:
It's as easy to record scribblings on the surface pro with Echo360 personal capture and if you use a mini display port to HDMI adapter you can easily display the output on the data projector.
If you don't want to be tethered to the lectern, the Wireless Display Adapter will let you walk around with the tablet while you're lecturing.
Recently we've seen staff using OneNote in lectures to develop ideas (often using the drawing feature of the Surface Pro)and then saving the resulting file as pdf for dissemination to students.
For some years now, Dr Joel Feinstein has been preparing a pdf skeleton of his lectures with gaps to be filled in.
He then generates a Windows Journal note from the pdf file, and gives his lectures using this (adding additional pages if necessary) and a data projector.
Additionally, he makes audio or video recordings of his lectures and then makes all of the resulting materials available to students from his module web pages.
This way of teaching is effective because it utilises all of the benefits of active learning, requiring students to actively participate in the process of learning rather than passively listening.
Audrey van der Meer and Ruud van der Weel from the Norwegian University of Science & Technology (NTNU) studied the differences between using a pen and using a keyboard and how it impacts learning and concluded that "Stylus technology – like the Surface Pen – provides a means to have an electronic record of one’s notes all in one place, while also having the benefit of integrating sensorimotor information as it comes in via the senses and is subsequently processed in the various parts of the brain through hand movement”, so perhaps students would also benefit from using the tablet pen to make their notes?.

Surface pro annotations - captured in a lecture theatre with Echo360.

Posted by Bartonferry at 04:41 No comments: